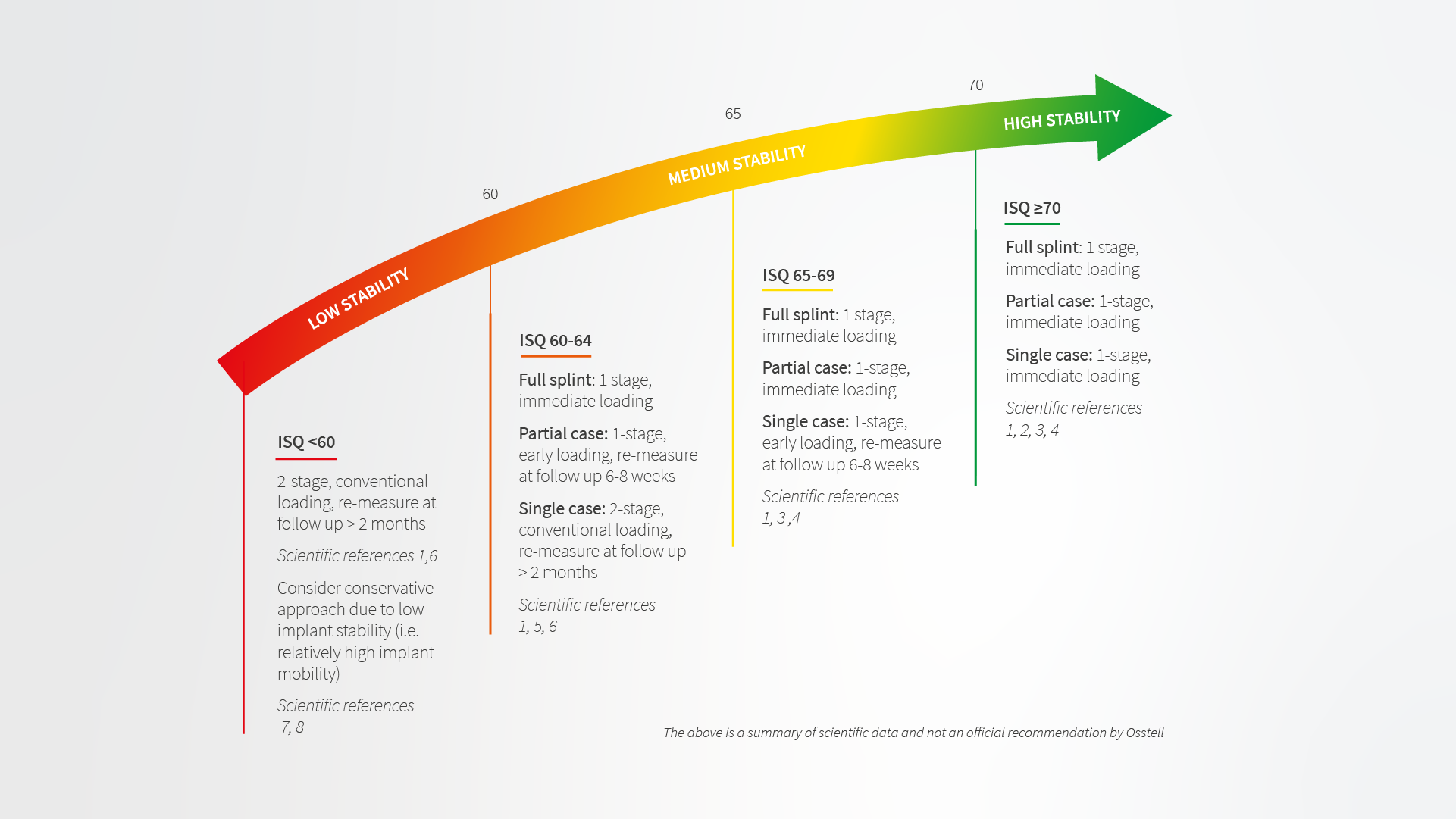 Back to Clinical guidelines

Osstell’s patented technology uses Resonance Frequency Analysis (RFA) that measures the frequency with which a device vibrates. By comparing resonance frequencies, the stability of a dental implant can be determined as the resonance frequency changes with different stabilities.

ISQ, or Implant Stability Quotient, is a scale from 1 to 100 and is a measure of the stability of an implant. The ISQ scale has a non-linear correlation to micro mobility. With more than 1300 scientific references, we now know that high stability means >70 ISQ, between 60-69 is medium stability and < 60 ISQ is considered as low stability.

Implant Stability Quotient (ISQ) is an objective world standard for measuring implant stability. The clinical range of ISQ is normally 55-80. Higher values are generally observed in the mandible than in the maxilla.The ISQ scale has a non-linear correlation to micro mobility. With more than 1300 scientific references, we now know that high stability means >70 ISQ, between 60-69 is medium stability and < 60 ISQ is considered as low stability.   If the initial ISQ value is high, a small drop in stability normally levels out with time. A big drop in stability or decrease should be taken as a warning sign. Lower values are expected to be higher after the healing period. The opposite could be a sign of an unsuccessful implant and actions should be considered.

Sennerby L Prof, Sahlgrenska Academy, University of Gothenburg, Sweden Implantologie 2013;21(1):21-33 (In German) Translated from German “It is likely that ISQ measurements can be used as one additional parameter for diagnosis of implant stability and decision-making during implant treatment and follow-up. The threshold values are the present author’s own somewhat conservative suggestions based on own experience and other values may be relevant for other clinicians and implant designs. The green zone contains “safe” implants showing primary ISQ values from, for instance 70 and above. The red zone contains “questionable” implants with an ISQ value below for instance 55. The yellow zone represents implants with an ISQ from 55 to 70”.

Kokovic V, Jung R, Feloutzis A, Todorovic V, Jurisic M, Hämmerle C Clinical Oral Implants Research, 00, 2013, 1-6 After 5 years, survival in the both groups was 100 %. The mean value of primary implant stability was 76,92 ± 0,79 ISQ. In the first 6 weeks, ISQ values significantly increased in the test group as well as in the control group. Based on these results, the self-tapping implants inserted in posterior mandible can provide adequate primary stability value as the main factor for immediate and early loading protocol.

4. The Predictive Value of Resonance Frequency Analysis in the Surgical Placement and Loading of Endosseus Implants

Pär-Olov Östman DDS, PhD, MD, Private practitioner, Falun- and Biomaterial group, Sahlgrenska  Academy, Gothenburg – Tandläkartidningen årg 100 nr 3, 2008 Paper IV 20 consecutive patients with totally edentulous maxillas were included in the study. The criteria for direct loading was insertion torque 30 Ncm and an ISQ > 60 on the most posterior implants and a sum of 200 ISQ (average 50 ISQ) on the 4 anterior implants. The overall conclusion with the thesis is that dental implants can be direct loaded with a good result if high primary stability can be obtained and if a stable provisional bridge with good occlusion is splinting the implants.

6. Diagnosis of Implant Stability and its Impact on Implant Survival: A Prospective Case Series Study

7. The relationship between resonance frequency analysis (RFA) and lateral displacement of dental implants: An in vitro study

Pagliani L, Sennerby L, Petersson A, Verrocchi D, Volpe S & Andersson P Journal of Oral Rehabilitation 2012 Both RFA and displacement measurements correlated with bone density. It is concluded that RFA measurements reflect the micromobility of dental implants, which in turn is determined by the bone density at the implant site. The correlation between ISQ and micron was non-linear and micro motion was reduced with app. 50 % from 60 ISQ to 70 ISQ.

The Technique Behind Osstell

How ISQ correlates to BIC