Back to Lectures and cases

After local anestesia was administered, an intraoral crestal incision was performed in the canine regions of each mandible. Mucoperiosteal flaps were elevated both buccally and lingually to expose the bone. Two TiUnite implants (3.75×15 mm, TiUnite, MK III, Nobel Biocare AB, Göteborg, Sweden) were placed in the canine regions of the mandible of each patient. Baseline ISQ measurements were made at implant level. Ball abutments (3 mm, Nobel Biocare AB, Göteborg, Sweden) were seated on the implants immediately after the implant placement (Figure 1). The following steps were performed to fabricate new prostheses on day 5 after surgery: Initially, study casts were made after making preliminary impressions using alginate. The final impressions were made with a custom-made acrylic resin tray using silicone impression material (Coltex® Medium, Coltene/Whaledent AG, Altstatten, Switzerland). The ball abutment replicas were placed into the impression and the definitive cast was poured. Wax occlusion rims were attached to the maxillary and mandibular base plates and final maxillomandibular jaw relation was determined. After the maxillary and mandibular casts were mounted, tooth arrangement was accomplished, esthetics, phonetics, and occlusion were checked. The restorations were returned to the laboratory for final processing using heat-polymerized acrylic resin (Meliodent, Heraeus Kulzer Ltd, Newbury, Germany) on the 6th day after surgery. The maxillary complete denture and implant-supported mandibular overdenture with respective gold caps were delivered to the patients one week after the implant placement (Figures 2-4). 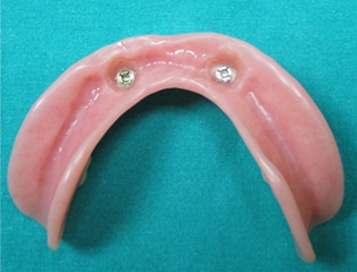 Follow-up: a) Radiographic evaluation Standardized intraoral radiographs of the implants were obtained with a paralelling technique at implant placement, after 6, 12, 18, months and 2, 3, 4, 5 years. All radiographs were scanned to digital files and marginal bone changes were measured in a computer using an image analysis software by one examiner using the implant-abutment junction as a reference. The distance between two threads of the implant, which is 0.6 mm for the implants used, was considered for the calibration of the measurements. b) Implant stability evaluation Resonance frequency analysis (RFA) measurements (Osstell, Sweden) were performed at implant surgery and after 3, 6, 12, 18 months and 2, 3, 4, and 5 years. At these follow-up visits, the ball abutments were removed from the patient and implant-level RFA measurements were taken with a transducer (Figure 5). 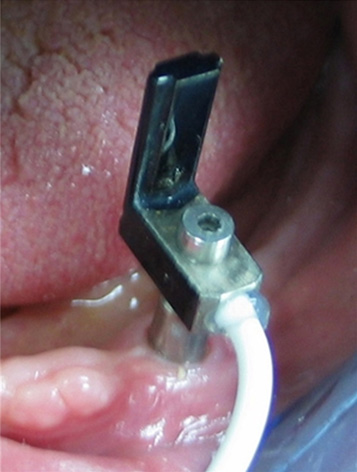 No implants were lost, and the mean marginal bone loss for the right and left implants was 1.1±0.3 mm and 1.2 ±0.2 after five years, giving a success rate of 100%. The mean ISQ values were 76 and 78 for the right and left implants at implant placement, and the same corresponding values were recorded at 5-year visit (Figure 6). ISQ values increased from month1 to month 18, which can be explained by bone remodeling (greater bone-implant contact). Then, ISQ values decreased from month 18 to year 5, which can be explained by marginal bone loss. 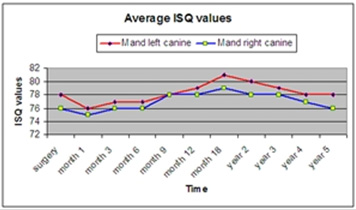 It has been suggested that 1-week of early loading protocol for two 15 mm-long unsplinted TiUnite implants supporting a mandibular overdenture may be a safe treatment modality for an edentulous mandible. Also, Osstell instrument objectively allowed us to monitor the implants during 5 years.

Answers clinicians must provide for their implant patients