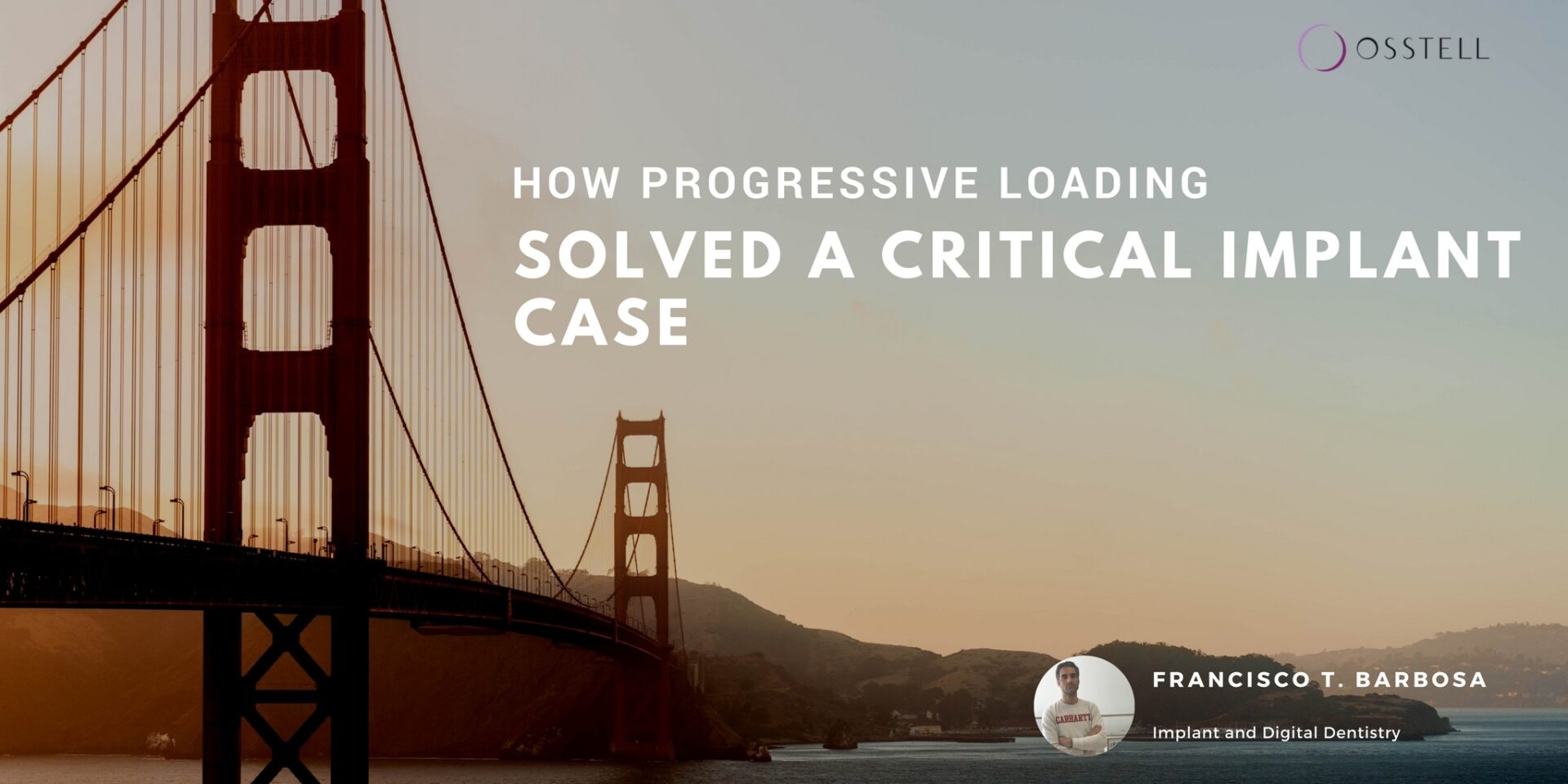 Every day we do a lot of things based on our intuition. We make decisions based on our own or others experience.
We do not need science to help us in our daily life, and we don’t have a clear indicator that shows us if our decision is the best.
Decisions based on practical experience is our way of life.
But when it comes to our profession as dentists, we do, or at least we should, evidence-based dentistry for…almost every treatment we perform.
As the title of this article says, I´m going to present a case about “progressive loading.”

Yes, I know, progressive loading is supported by few clinical studies (Rotter 1996, Appleton 2005, Ghoveizi 2013), but -and here comes the interesting part- the rationale behind this concept makes sense from a clinical and biological point of view.

Let me explain it.

Some implants at the end of the osseointegration period have less than 25% of the overall surface in contact with the surrounding bone (Misch 1993).

Although they have a low BIC values, they are clinically stable. However, this stability may be lost in the medium or long term when the implant is loaded with the definitive restoration.

Problems are more likely to occur if the bone density around the implant is low and as we all know, poorest bone density is present in the posterior maxilla (Norton 2001) although there can be different bone density in various regions of the jaw (Parker 2008, Fuh 2010).

How to improve bone density around implants during the healing period?

At the moment no method exists that is clinically validated and predictable to augment bone density around an implant. (Click to Tweet)

Regarding Frost´s “mechanostat theory,” the enhancement of bone density is a result of a dynamic relationship between loading and positive bone modeling response (Frost 1983, Frost 1987).

At this point, we can start introducing the concept of progressive loading:

This is important mainly in the posterior maxilla where the bone quality is lower and biological complications are more likely to occur (Nevins 1993).

A patient with a horizontal fracture of a canine. Good general health conditions, non-smoker.

After evaluation of the tooth remnant, we decided to carry out a ridge preservation with Bio-Oss® and close the socket with a combination epithelized-subepithelial connective tissue graft (Stimmelmayr 2010).

This combined technique has advantages over the free gingival graft (Landsberg 1994, Jung 2004): 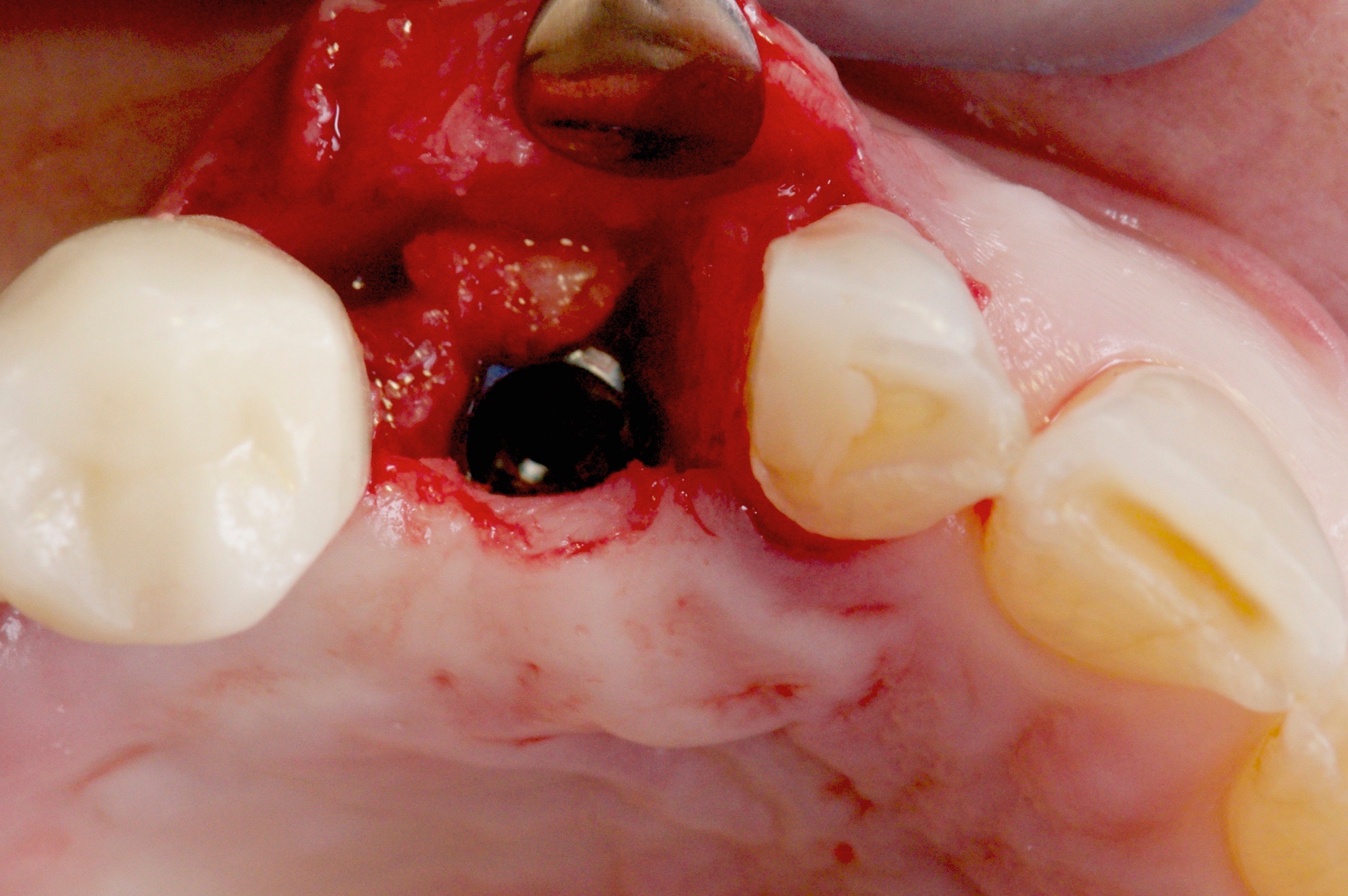 Lately, we are waiting no more than four months after a ridge preservation (De Risi 2013):

After placing the implant, the ISQ value was 77 which is a high value even though it was placed in a grafted site (Zita 2017). 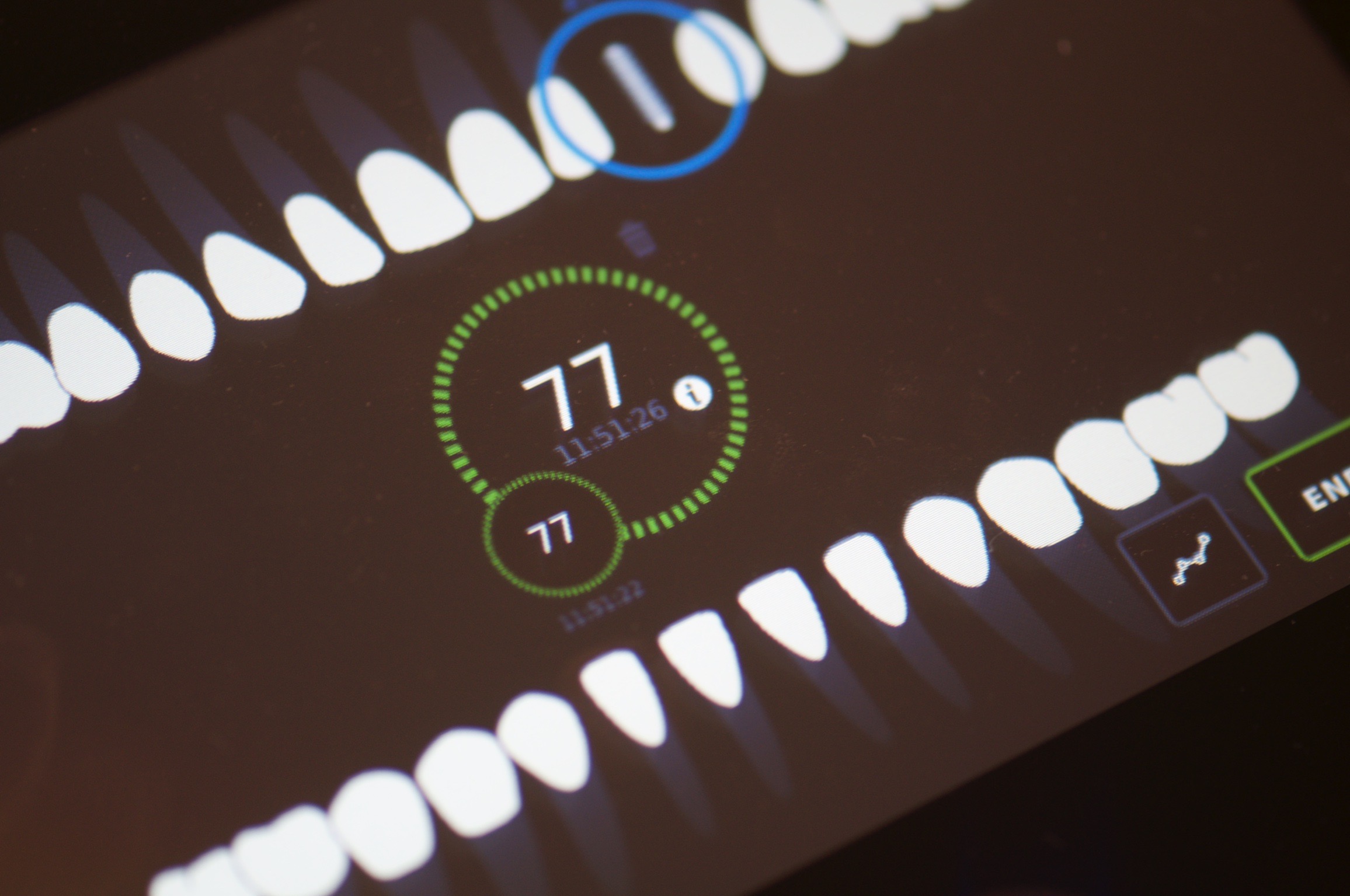 After one month and a half, we did the second surgery, and again the ISQ was measured.

This time something unexpected was happening: The ISQ value had dropped almost 20 points, which is a sign that something is wrong. 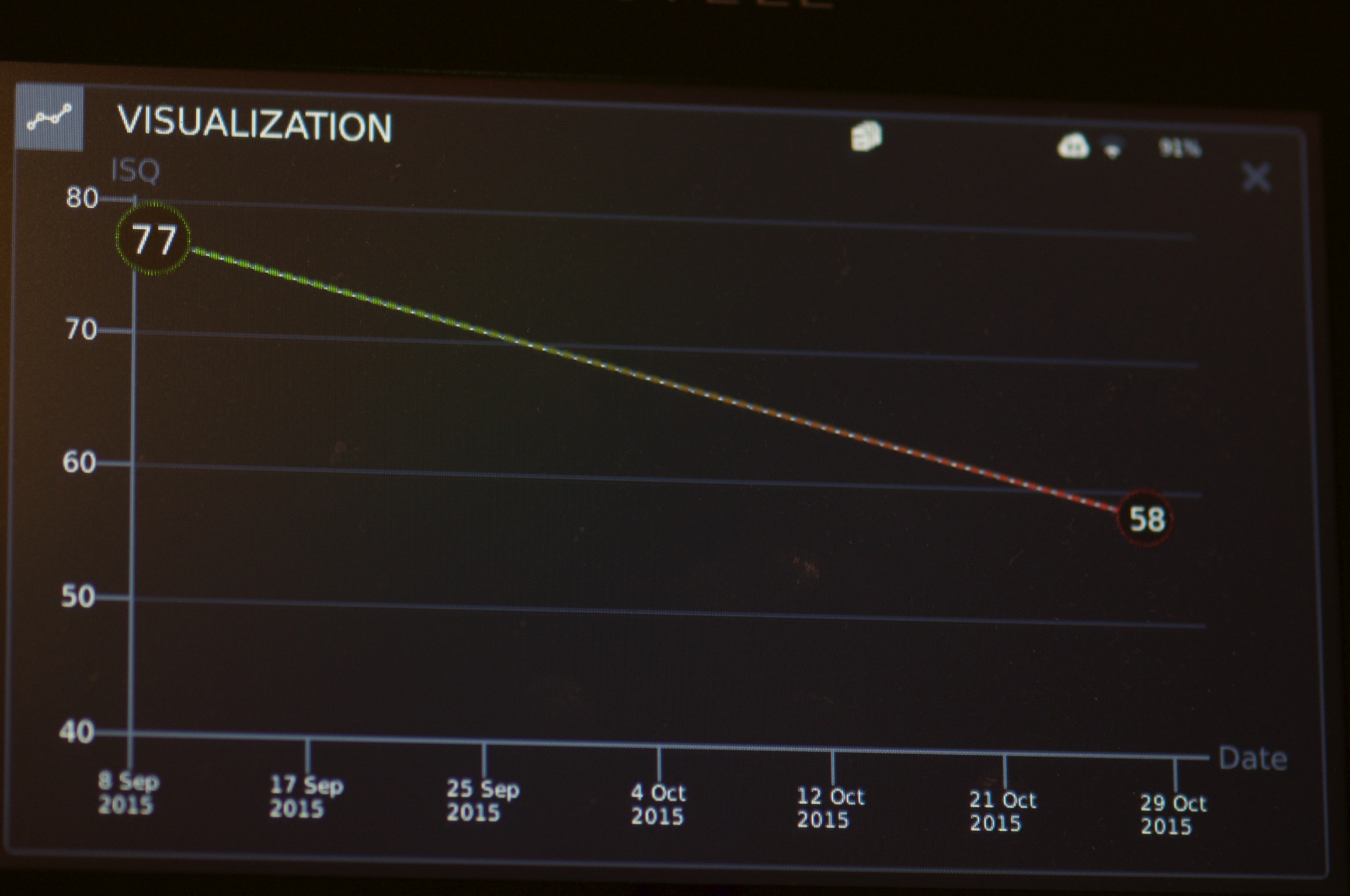 There is always a variation in the ISQ during the osseointegration process, and values usually go down initially (first few weeks after implant placement), depending on the quality of the bone where the implant was placed (Barewall 2003).

We decided to perform a digital impression with the 3Shape Trios 3 and order two PMMA provisional restorations designed and manufactured in CAD/CAM (Phibo CAD/CAM. Barcelona. Spain). 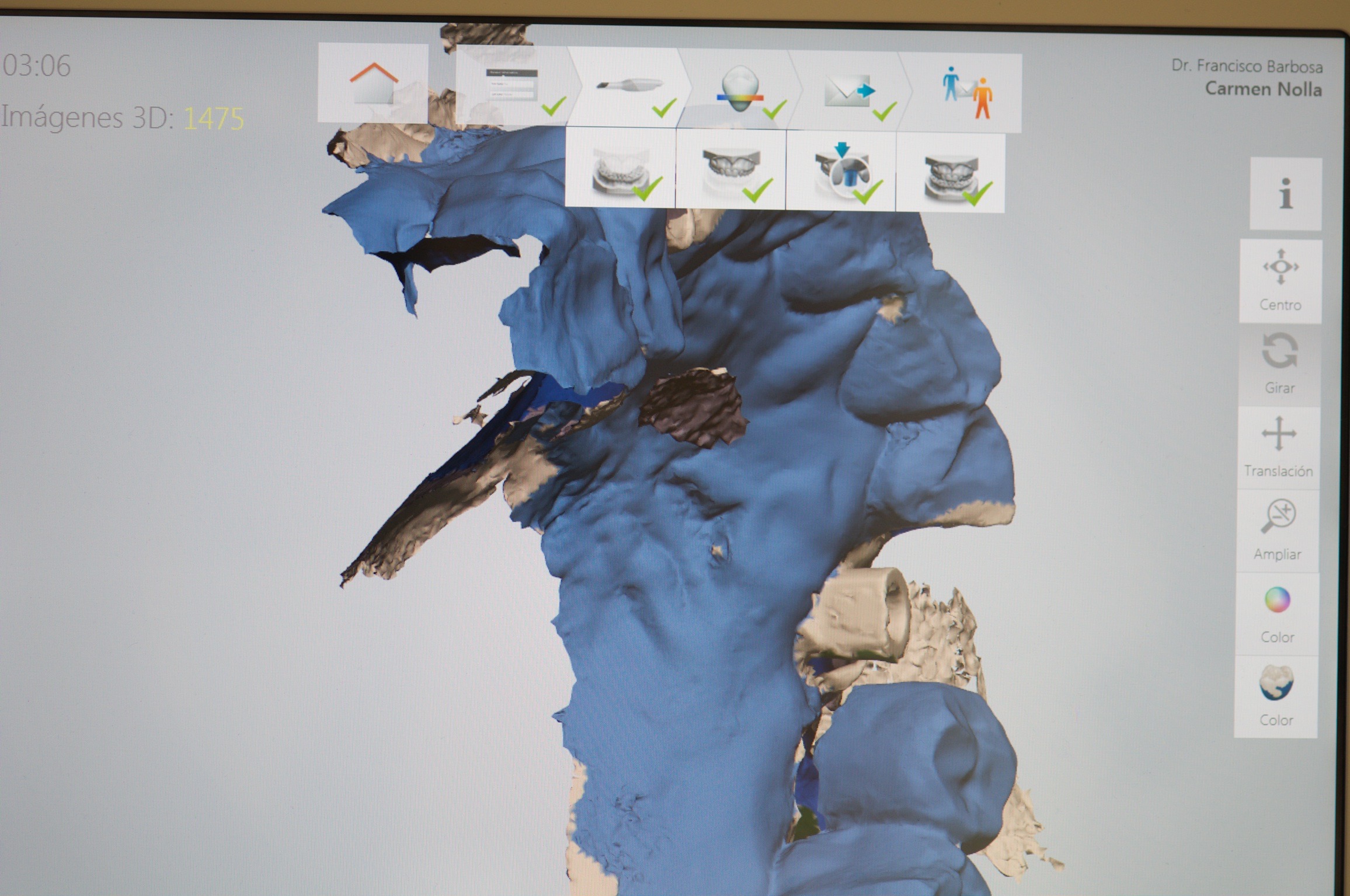 1) First, we designed a provisional restoration out of occlusion with the antagonist to observe if there was any ISQ value progression over time. 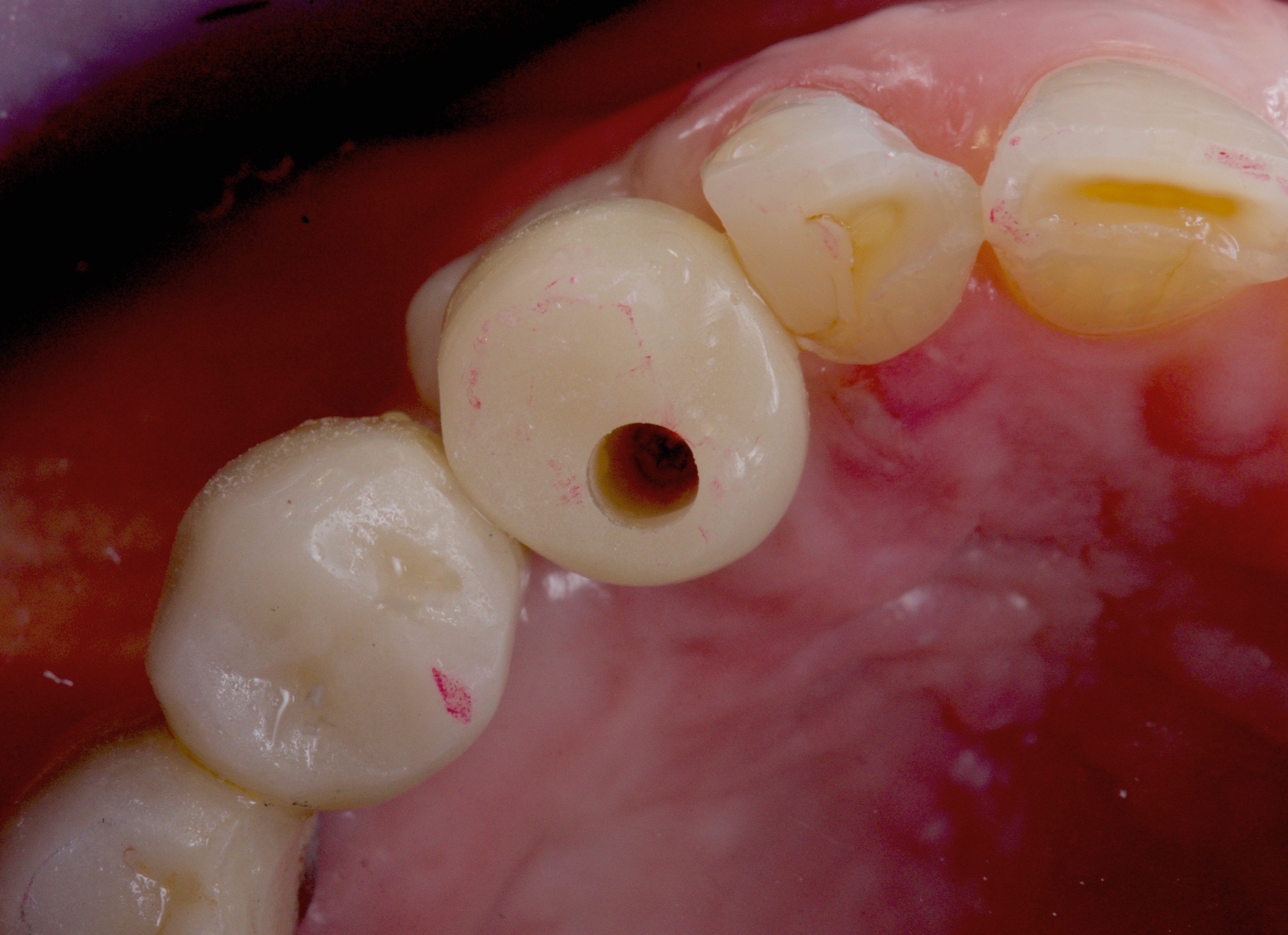 2) If there was any improvement in the ISQ value, the initial provisional was then substituted with a functional provisional. 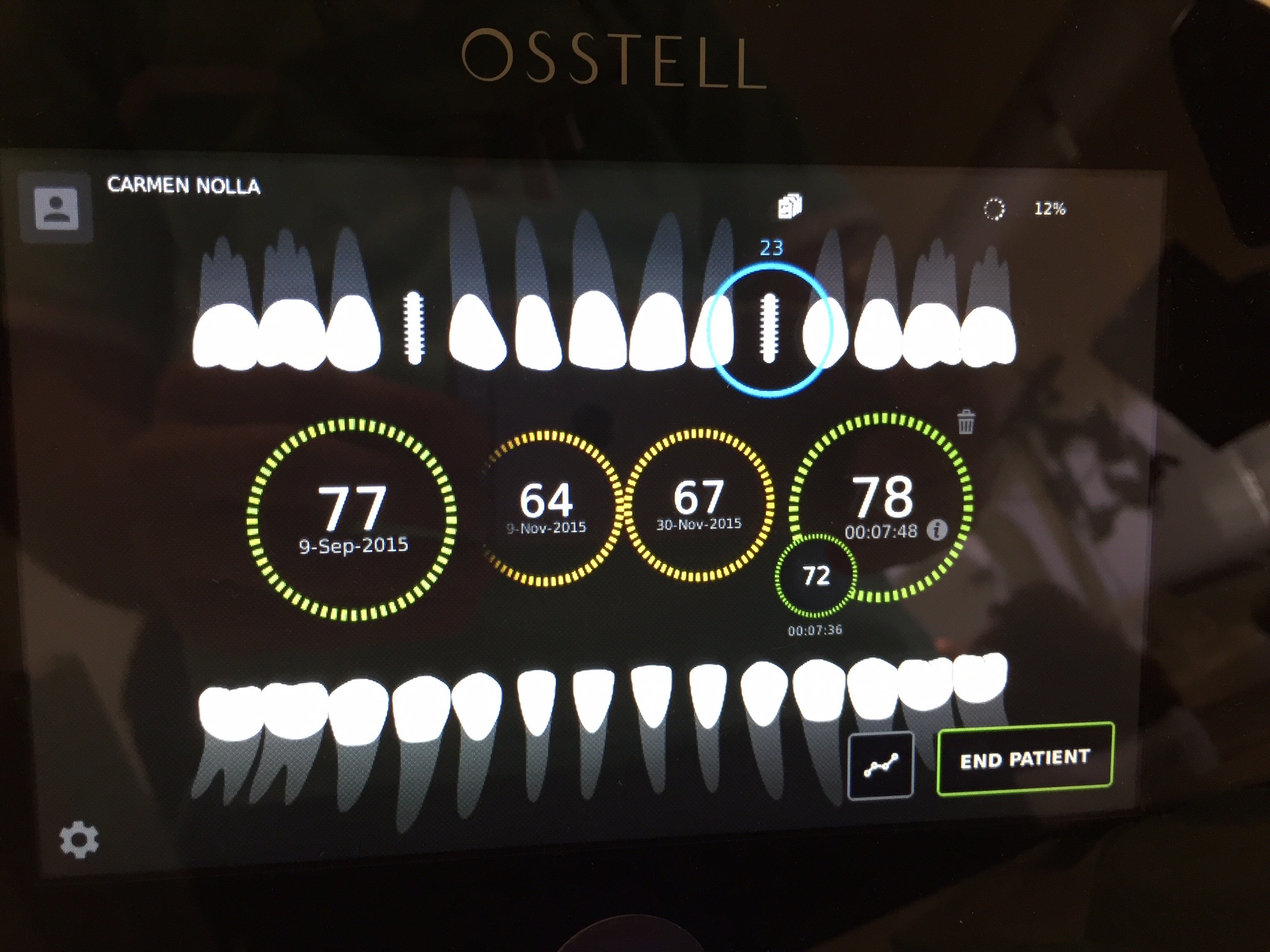 After one month, the ISQ value was up almost 10 points, and we decided to deliver the second provisional with functional contact.

Three months after the second provisional was delivered, the ISQ value was already up to 70 ISQ, and we decided to perform the definitive restoration.

It is not a beautiful outcome, but the patient accepted the definitive aesthetic result and the restoration were screw-retained with a torque of 35 NCm. 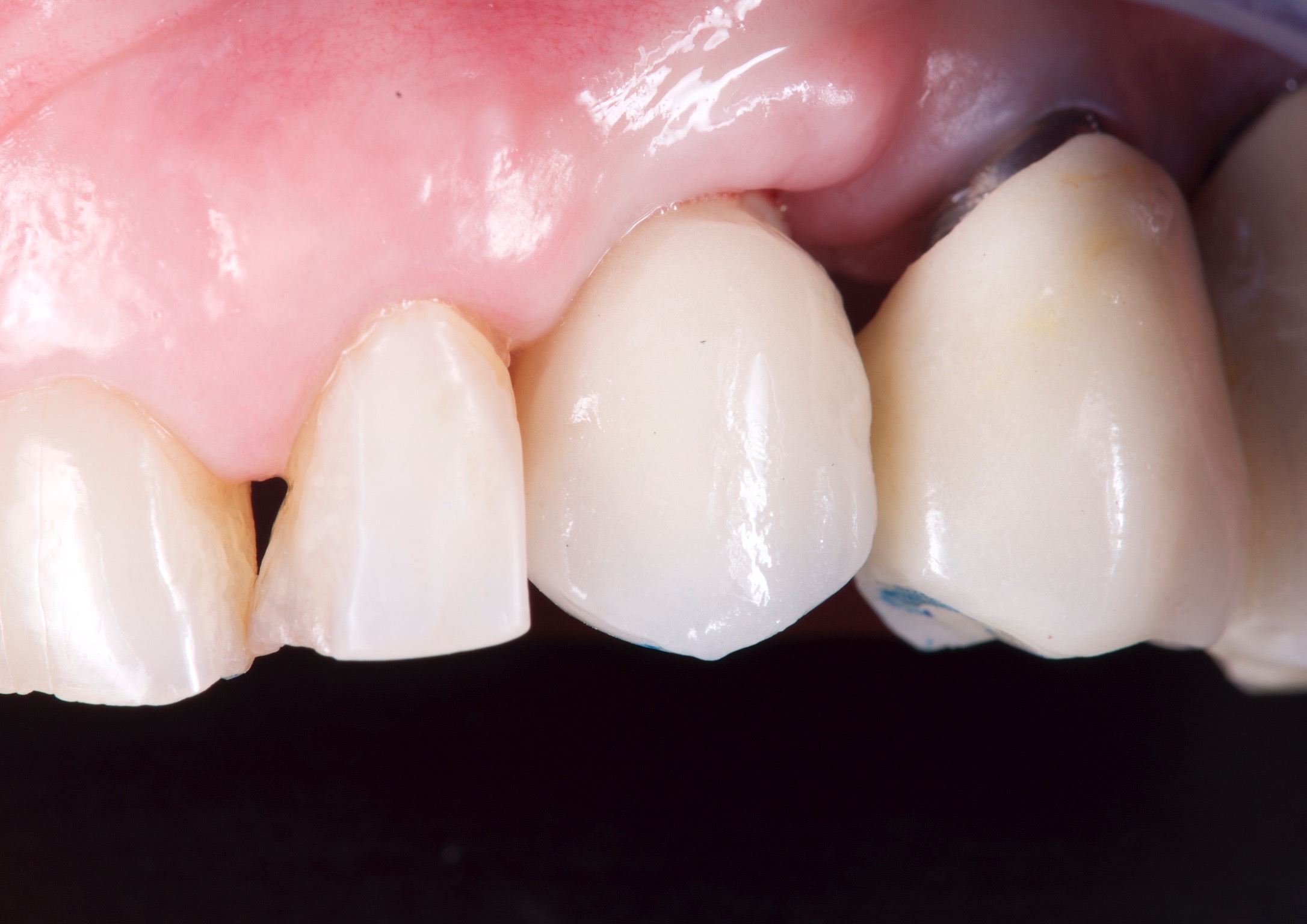 Although the limitations of this short case report, we conclude that using ISQ measurements (RFA) to monitor bone remodeling before delivering a definitive restoration can improve the survival rate of the global rehabilitation.

The uncertainty of the BIC (bone implant contact) between the implant and the bone and also the resistance of the implant to the micromovement at the time of the definitive loading, justifies the use of the ISQ measurement  to monitor the implant behavior during osseointegration.

It was also proved that the Osstell® ISQ might also indicate information about the bone density around an implant, which can be of great value in the posterior maxilla (Manresa 2013).

Of course, a lot of questions are left to answer yet, like: