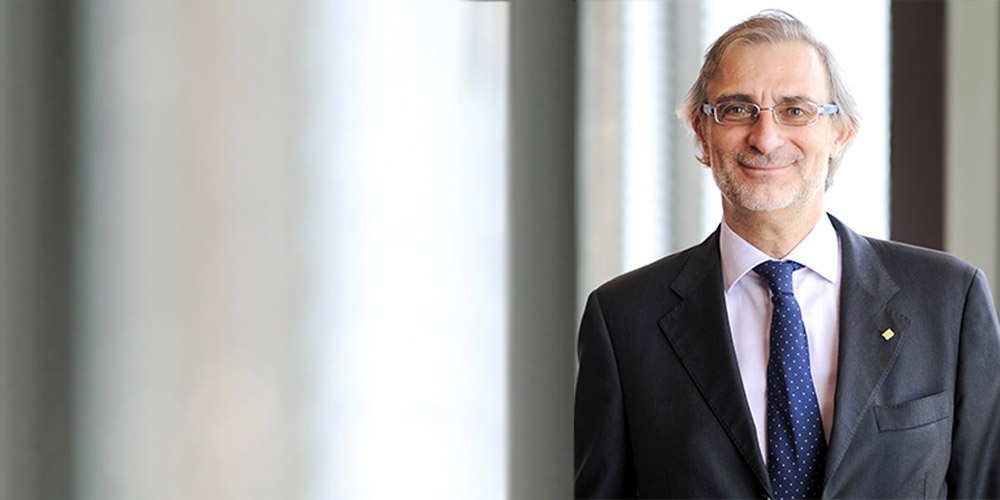 In international literature, a growing number of studies have assessed and quantified alveolar bone resorption following an extraction procedure.1-4 After dental extraction, height and width of the residual bone ridge suffer a reduction that appears to be greater in the first 30 days1 and about 50 per cent of the total resorption in the first 3 months3. The exact causes of this mechanism are controversial and currently under discussion.4-8 In order to limit bone resorption after the act of extraction, several techniques have been proposed. Different regenerative procedures designed to preserve the alveolar bone crest have been used over the years and analysed in the literature. However, despite these procedures reducing buccolingual resorption, it has been demonstrated that there is still a loss of bone after healing.9-11 Paolantonio (2001) was the first to argue that post-extraction implant placement could prevent bone resorption.12 Others have dismissed this hypothesis after ample studies on humans4,13-17 and animals19,20 that, despite positioning of the fixture, there is still buccolingual resorption of the ridge. The principle that determines the peri-implant bone loss has not yet been adequately clarified, but several factors appear to be implicated such as localisation (anterior/posterior), the thickness of the buccal wall, the gap between the implant surface and the bone wall, the type of surgical technique used (with/without flap), the presence of interdental osseous peaks and the surface treatment of  the implant.19,22 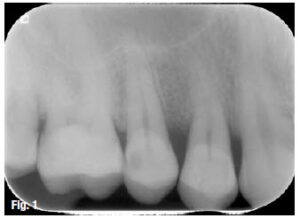 Moreover, due to a frequent radicular anatomical variability with respect to the profile of the implant, after positioning of a post-extraction fixture there is often a gap between the implant surface and the bone wall (residual bone implant gap, BIG).16 Although the BIG can be reduced by the presence of a blood clot,18 the use of biomaterials as support has been verified and validated by several studies on animals20, 30-32 and humans21,25-29. As demonstrated in a study by Han et al. (2011), the regeneration of the peri-implant defect with biomaterial, associated or not associated with the membrane, increases the percentage of bone to implant contact (BIC).33 During the above-described regenerative procedure, usually priority is given to the most coronal portion with the objective of limiting bone resorption, maintaining interproximal peaks if present, better managing gingival aesthetics and preventing invagination of soft tissue in the defect. Instead, our protocol provides for the positioning of biomaterial even before implant placement. This allows greater primary implant stability already during insertion. Also, in consideration of the fact that most of the existing fixtures are self-tapping, the macrostructure of the implant favours progression of the inserted particulate downward by first placing it in those areas of apical defect otherwise not easily accessible in the next phase. It should also be remembered that it is the more vascularised apical portion that originates the regenerative push that will then progress in the coronal direction, thus increasing the BIC.34

The purpose of this study is therefore the demonstration of a way of operating that aims to improve the primary stability of the implant and to obtain a more predictable regeneration also of those alveolar parts not accessible with conventional methods. Described below is one case selected among those who have so far been treated with this suggested protocol. This study was conducted in accordance with the Declaration of Helsinki of 1975 and revised in 2000. Informed consent was obtained from the subjects for participation in this study.

Click here or on the picture to enlarge it 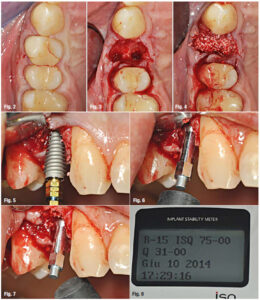 A 52-year-old male patient presented with soreness in position 1.4.. Clinical evaluation accompanied by intraoral X-ray revealed a complete vertical fracture (Figs. 1 Fig. 3). The implant site was prepared with ultrasonic inserts (Piezosurgery®, Mectron) at the palatal root. Site preparation was then completed with implant drills, as always performed and suggested by the authors.35 Before insertion of the implant, the post-extraction socket (in both the vestibular and palatal space) is filled with biomaterial (used in this case was calcium triphosphate, R.T.R.®, Septodont; Fig. 4). The fixture was then inserted (AnyRidge®, 4×13 mm, Megagen Implants; Fig. 5) and the primary stability achieved and verified with Osstell® (65 ISQ; Figs. 6-8). The coronal gap, as usual, was then filled with additional biomaterial (Figs. 9-11). The ostoperative intraoral X-ray shows the correct position of the implant (Fig. 12). Finally, the patient was instructed in home hygiene and care with chlorhexidine rinses (0.2 %, every 12 hours for 10 days) and antibiotic therapy (amoxicillin and clavulanic acid, 1gr, every 8 hours for 6 days).

The insertion of biomaterial to fill the BIG even before insertion of the implant seems to determine the best functional results in prosthetic-implant rehabilitation. This protocol, indeed, not only results in an improvement in the primary stability of the implant, but also allows regeneration of those alveolar parts otherwise inaccessible with other techniques.

The positioning of an implant in a bone defect usually leaves a space between the implant surface and the alveolar bone wall. With the aim to improve osseointegration and limit resorption of the ridge, autologous, heterologous and alloplastic bone, with/without membrane, has been used in combination in order to improve bone formation in these defects.38-40 Nevertheless, procedures for regeneration of the post-extraction site associated with immediate implant placement have been shown to limit resorption, although a complete preservation of the site has never been documented.9,11,41 Another fundamental  parameter is the size of the BIG. A value of 1.5 to 2 mm can determine healing without compromising the degree of osseointegration. However, whether the width of the space between the surface of the implant and the bone crest plays a role in the remodelling is still under discussion. 20 Also currently considered important is the location of the implant in relation to the level of the crestal bone of the site. Other studies have shown that vertical resorption may be limited not only by filling the gap, but also by excess regeneration of the upper portion of the crest. To achieve this, the graft material should be placed in the most coronal portion of the site and on the buccal side of the outer surface of the alveolus.46-48 Taken together, current knowledge indicates that post-extraction implant placement cannot prevent dimensional changes of the ridge, but association with biomaterials seems, to date, to be the treatment of choice to limit resorption. Nevertheless, if the element to be extracted is associated with periapical disease and/or uncontrolled periodontal disease, post-extraction placement of the implant is to be excluded; in this case, the resorption of the alveolar ridge cannot be preserved and a more traditional implant procedure should be performed.49 Finally, our findings are consistent with previous results,14-16,29,36,37 showing that he insertion of biomaterial to fill the BIG even before insertion of the implant determine the best functional results in prosthetic- implant rehabilitation. Further investigation need to evaluate the resorption of the alveolar ridge associated with the placement of post-extraction implants using the surgical protocol described by the authors. 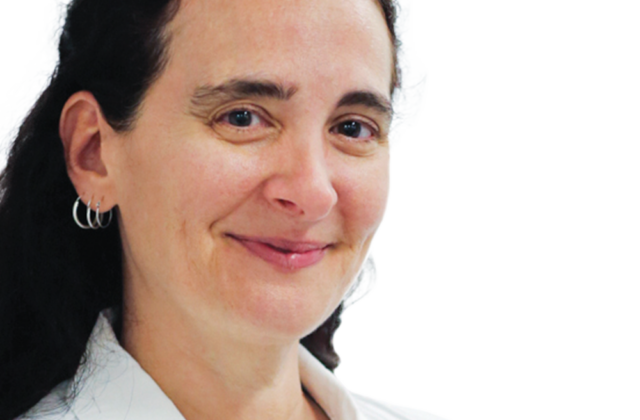 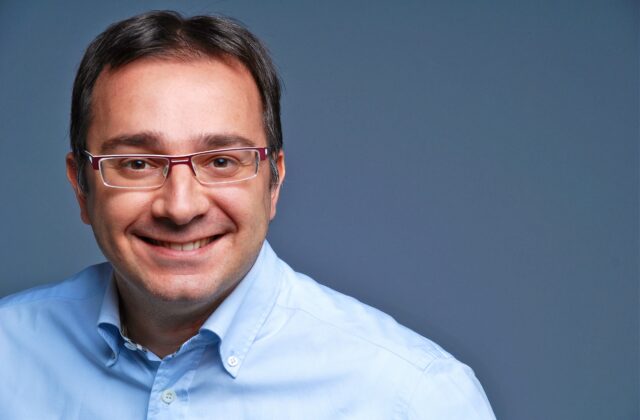